HANDS AND THEIR CONCEPT

I don't intend to present Soto Mesa's painting from a pre-established scale of values. I shall be satisfied with an approximation of what I believe his proposals are, and at the same time what his work suggests to me. We have known each other since the origins of the Edurne Gallery and I have followed his trajectory without interruption so I approach his intentions and results as a painter friend who interprets with the proximity of what is familiar and who, without renouncing the clarifying intuition of the concept, forgets about evaluation objectives. I am not trying to convince anybody, neither is the artist trying to indoctrinate, rather he offers his work from the prudent distance which every artist must maintain with regards to his own achievements, as a homage of intelligent respect to the inexpressible dimention of art.

Soto Mesa due to his extended teaching experience has been exceptionally well informed and probably because of this, has never had the temptation to feel like a notary of aesthetic ideas. He hasn't felt the need to defend dogmatic claims as a personal vindication. He hasn't proposed fundamentalistic theses not by themselves nor by strategies. He is more of the opinion that since the artistic happening is but a continuation of one's subjectivity, it shall never have a definitive justification which would lead to dangerous radicalisms.

We are faced with an artist who is struggling between presence and absence, proximity and distance, evidence and mystery. And everything because of the ambivalent paradox of synthesis which seeks the most essential pensive concept as much as the craft aspect which is made with the hands.

He seems to face a manifesting unveiling according to presence, surprising even for himself, but not with a creator-demiurge's pretentious solemnity, but in a more human, humble, everyday way He believes in the dignity of the aesthetic attitude, from the very way amazement is, not boundless, calmly, allowing himself to be surprised without meditation, accepting the work, the results, rather more like the natural continuation of his own identity than a programmed investigation upon extrinsic criteria or excessively theoretical ones.

The starting point is the perceptual game figure-background, emphasized with all its clarity. From this point on I shall display upon this bi-polar relation a series of concept pairs, already mentioned, which if dialectically understood could be these:

Certainly some "body-shapes" do appear with an outstanding profile and with an intentional ambiguity among the geometry, so thoroughly studied by him in other moments, and the organic or mineral nature, upon backgrounds treated with care which do not lose protagonism in the structure of the work. It seems that the interests of the painter are far from being of a scientific, analytic or descriptive nature. It is rather a matter of representing "body-shapes" which have been captured in a permanent motionless moment, given that they don't invite us to question a before or an after. It is because of this, that the stormy irreality of their presence, to which we do not find a justifying causality, suggests at the same time a possible and sudden absence, with the same gratuitousness and mystery as they first appeared. It is the proximity of the evident body in a dialogue, paradoxically silent with the surrounding background upon which it outstands, a background which is not neutral but which is imposed upon us with an anonymous and suggestive density.

Evidently there isn't the least formal insinuation about the possible physical trajectories of the appearing disappearing, we are in the antipode of the futurist's language. Here the maximum stillness of what is represented allows us to claim, contrastingly, its absence, perhaps because in order to get hold of reality we take the principle of causality and when this is not applicable-it seems to us that both one thing and its contrary might occur.

Soto Mesa has proven along his artistic trajectory an evident alternance between both aspects, in stages which alternate a descriptive sensorial intimism with solid conceptual geometries. In this series of paintings both attitudes appear. The "body-shapes" suggest presences inmanent to nature: organic or mineral vestiges, remote fissures, geological engrammes, material appearances of an unknown origin. We are not trying to investigate here the biological geological memory as a thesis which is written in the prints of these bodies detached from hidden cosmologies. To be more on the contrary, the whole scope of the canvas appears sublimated from the inexplicable irreality according to a conceptual distance which is based as much on the geometrical stillness of the figure, as on the opaqueness of a range of colours hued in such a way as to isolate the objects from the everyday peripetia, which are known, which can be observed, and which on its own terms gather a kind of halo from the intemporal landscape of the Spanish pictorical tradition.

But it doesn't renounce to sensorial contact The painter enjoys painting, manifesting the paint brush's insistent print, which even suggests to us the taste or tactile values which are the ones nearest to sensoriallity.

He wants to get hold of the work by the continual technical craftmanship which travels from the hand to the canvas, In this way the work has the creature's organic proximity, at the same time and this is the permanent paradox; these beings are represented from a distance which suggests a kind of cosmic Nevertheless, there ís no drama, but something of stoical fatalism, solved in a calm determinism.

Two opposites are played with; on the one hand the technical operative taking: to insistently lay down the paintbrush, to knead the painting, to manifest the dignity of that which is elaborated by the hand in the most traditional aspect of painting, on the other hand the of the inapprehensible, the wisdom to not harass with as excess of unnecessary questions lo pro pose the mystery of art's fecundity.

When I talk to Soto Mesa about his work, he very humbly insists on the truth of his work, He is aware that this truth is not revealed by theoretical demonstration, which he wisely assumes to be impossible, but by means of showing, He the attitude of formal ethics, which is the giving of the most sincere availability. He certainly relays upon solid plastic criteria to consider his work as finished, but he doesn't question himself excessively about an adequate truth between the lyrically painted and an analytical objective as a theoretical reference For he himself this is his evidence, Being of the intuitive tradition he claims to reject the methodological a posteriori, and as a consequence he isn't tempted to convince by theoretical demonstration, but he aims, knowing the enormous difficulty of the undertaking, at achieving the revelation truth, So when he creates which are hall recognizable hall ghostly he does so motivated rather more by the existence as a mysterious enigmatic event than by the characterization of a body in its real physical behaviour. In fact when he represents two of them they remain in a mute co-existence and not in a temporalized co-existence.

Soto Mesa paints with an attitude of risk. The structural simplicity of the composition, the closeness lo traditional technique, the evident profiled manifestation of shapes, place his paintings on the verge of economy of ways and concepts.

Aware of the situation he assumes it, from a synthesis of a conceptual catharsis and as a point of gravity of his Iyrical enthrallment. This implies that there is just one possibility to be right and many to be wrong, It is because of this that in spite of the apparent ambiguity of his shapes, his definite acknowledgment is preceeded by a controlled study of its situation, by a most careful drawing of profiles and by a slow nursing of the technical craftmanship, both of the skin of the bodies and of the cosmic reverberation of his backgrounds.

Here are his results. These are his intentions. Upon this attitude his honesty lies. Soto Mesa doesn't wish to make his exposition theoretically clear. He doesn't try to vindicate a debate about the return to traditional painting.

It is enough for him to know that what he paints is the sincere prolongation of his own personality. Faithful lo his enormous respect for the artistic he doesn't harass with speculating because he knows that both reality and interpretations of it, which is art, will always exceed us.﻿﻿ 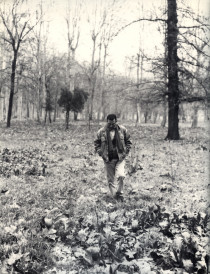